For this edition we are delighted to have partnered up with Fondazione ICA, Milan. The outside and lower space of the building will be taken over by:

Anna Franceschini (IT) presents JET SET is a site-specific re-edition of DISCOLITE; Gabriele Garavaglia (CH) + Miriam Laura Leonardi (CH) —infiltrates the space with his zombie-like performers having a custom made ringtone [Ultimo Impero (2019)]; Jacopo Miliani (IT) featuring Arcadia presents 2.2: “The picture has the logical form of representation in common with what it pictures.”

The evening will wrap up with live acts featuring sound and video of: Tadleeh (IT) and Lumpex (CH).

Thanks to untitled association.

Las Bravas Street Food will offer a variety of beverages and serve you quick and delicious food for all tastes and diets. 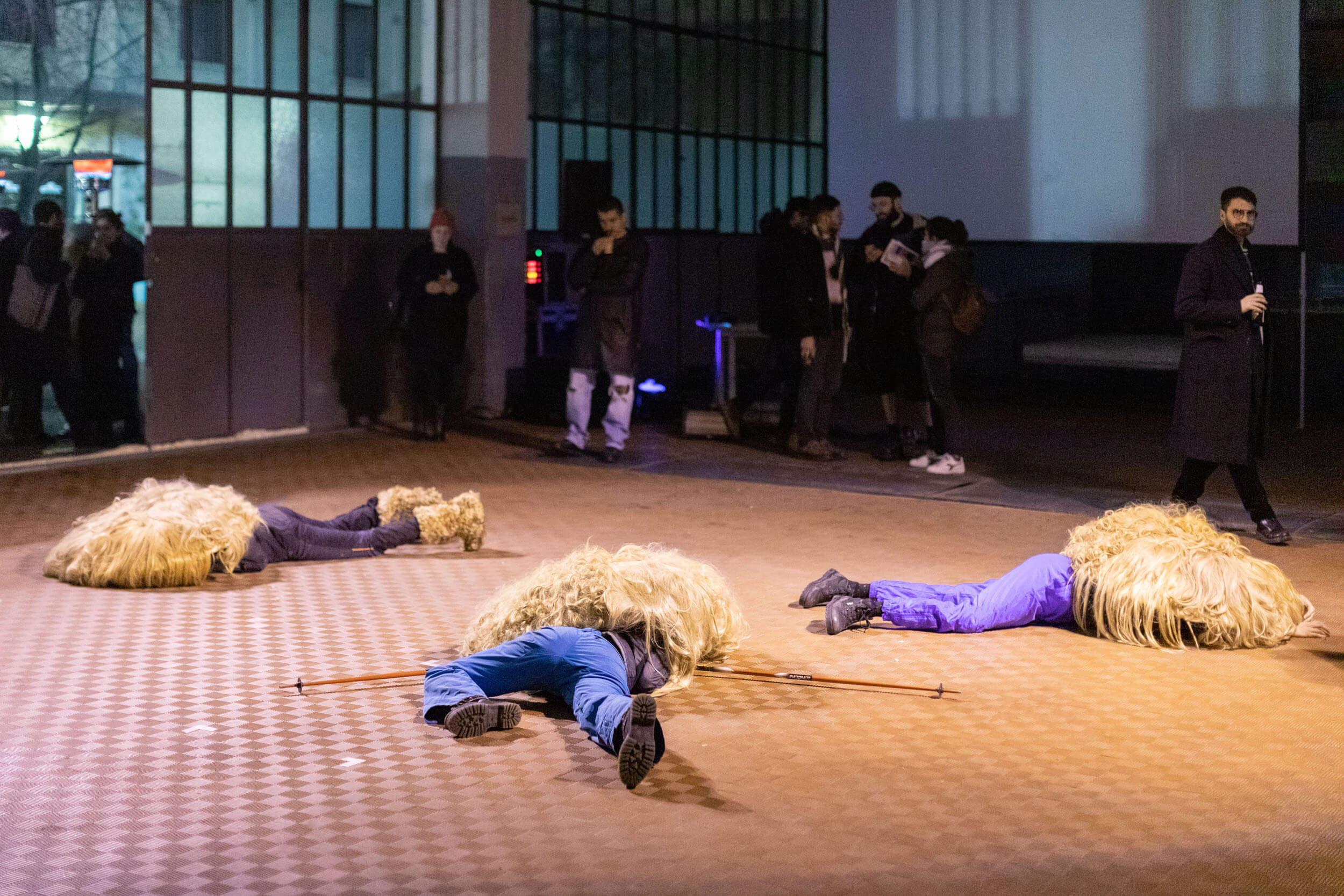 JET SET is a site-specific re-edition of DISCOLITE, a performative piece which Franceschini conceived in 2016 and continues to re-enact. It is a choreographic pattern that investigates the hybridisation between a human body and an object. In JET SET the object in question is semi-prosthetic and metonymic. The JET SET‘s “body” is a very tired product, belonging to social class.

We would like to thank Carmelo Rifici, director of the Luca Ronconi School of Theatre at the Piccolo Teatro di Milano and Vistamare gallery / Vistamare Studio – Peschiera/Milano

Ultimo Impero (2019) is enacted by a group of people from the local art scene who wear specific hand painted contact lenses on one eye. They show signs of a mutation which is halfway between human and transformed being. Moreover some of this attendees carry a custom made ring tone, which functions as a sort of live scattered soundtrack.

2.2 “The picture has the logical form of representation in common with what it pictures.”(L’immagine ha in comune con il raffigurato la forma logica della raffigurazione).
Performance 2.2 is a possible translation of Ludwig Wittgeinstein’s TRACTATUS LOGICO-PHILOSOPHICUS through a pure representation. Every time the performance is put into act, it avails itself of a new collaboration and a new interpretation. This time round Arcadia, singer and drag queen (alter ego of Stefano Filipponi), embodies the language of Wittgeinstein.

Rafal Skoczek lives and works in Zurich.
Rafal Skoczek is a polish multidisciplinary artist and under the name of Lumpex he has been DJing, exploring and decomposing various experimental music genres as Techno, Ambient, Hardcore, Noise, Jungle, Musique Concrete, and Black Metal, with releases on Forbidden Planet, Kashev Tapes, BRKN and a new E.P. coming out on the Zurich based Gentrified Underground Label.
As a visual artist Rafal Skoczek has shown his work in Kunsthalle Zurich, Kunsthalle Freibourg, and Kunsthalle Tbilisi. He has been nominated and won the Kadist – Kunsthalle Zürich Production Award (2016), The Kiefer Hablitzel │Göhner Art Prizes (2018).

Lumpex is the responsible virus for the musical de-composition of the ‘straight’ carcass.
The mold on the vinyl, and the fungus at the end of the world.
Jungle, forest, grotto music
red and black metals and rust
samples carving, re-appropriation and theft.
The blade that decapitates the minimalist bourgeoisie
Lumpexprolet represents the global union of the footworkers, the still standing workers in abandoned factories.

Hazina Francia aka Tadleeh lives and works in Milan. In 2019 the Italian artist set out on a new path both in music (at the expense of her now ex-project Petit Singe) and in promoting events (Milanorovina project’s closing and its reopening as Sine Confine). Ego Will Collapse is Hazina’s release with the newborn Berlin label Yegorka, founded by Danish producer Why Be and Dan DeNorch of Janus.

Ego Will Collapse is a feat of complex and emotional confession. Six distinct tracks advocate a motif of chaos and disorder, a loss of balance and reason; of love destroying a heart from within. As s raw dark reminder, soaring red out of a void, Tadleeh moves with paced and firm urgency, her record is a rhythmic account of pain and transformation. Despite drawing from a variety of the artist’s cultural heritages and extending from her previous work, Ego Will Collapse is true to itself, a denuded release.
1/8
Close