Hybrid creatures or composite beings have forever populated our cultural thinking. Furthermore, creatures that escape a clear identification with a single species and whose bodies are an assemblage of human beings and animals or different types of animals are depicted in the most ancient drawings and sculptures. Just think of the Great Sphinx of Giza or the faun, which in Roman mythology was depicted as a half man and a half goat creature. In the 21st century, hybrids are omnipresent. On the one hand their potential forms have multiplied, reaching a level never seen before, thanks to advances in technology, in natural science, and genetic engineering. More than crossbreeds between humans and animals, today’s hybrids present themselves as a mixture of human (or other organic composite) and inanimate matter. We are all hybrid beings: our iPhone, for example, has long since become an extension of our body, just as microchips placed under our skin have become a reality. They are invisible, synthetic, sometimes hormonal and psychoactive substances that we take on and mix with our bodies to make us hybrid creatures. Depending on the point of view or context, these transformations can be considered both optimisation attempts driven by capitalism or self-induced and obstructive gestures. On the other hand, hybrids, and the idea of hybridism in general, turn out to be very stimulating food for thought. Speculations about a post-human world or Donna Haraway’s cyborgs lead us to think about our present, as well as a broader notion of hybridism, such as the interweaving of two systems that are normally separate. These contain the potential to develop alternative social concepts that are non-hierarchical and capable of bringing together various species, or strategies for survival in a utopian as well as dystopian future.

WE HYBRIDS! is therefore both a statement and a thesis. The group exhibition brings together six young artists from Switzerland who address the idea of hybridism through different media and narrative models. The interactions and connections between man and technology, but also the amalgamation of organic, microbial or mechanical bodies, are the central themes of Vanessa Billy’s work (b. 1978/Geneva, lives and works in Zurich). In the exhibition she presents, among other things, potentially mutated chromosomes and an installation with silicone imprints that may come from man, animal and machines. Chloé Delarue (b. 1986/Le Chesnay, FR, lives and works in Geneva) is interested in both cyberpunk novels and the influence of technological developments on the human body and mind. Since 2015, she has been working on her complex body of work TAFAA (Toward A Fully Automated Appearance), whose objects are hybrid assemblages of organic and non-organic materials that resemble archaeological remains of the future. Florian Germann (b. 1978/Kreuzlingen, lives and works in Zurich) experiments with different materials and their “energies”, in his words, and charges of meaning his sculptures with his own stories. The artist is fascinated by Blade Runner, cyborgs and aliens. The two objects he creates especially for the exhibition are made of man, animal, and machine. Gasoline and oil flow in these warm, glittering, almost skin-colored and geometrically reduced “creatures’’ veins. Influenced by speculative narrative forms of science fiction literature, in which fiction and reality mix, Gabriele Garavaglia’s (b. 1981/Vercelli, IT, lives and works in Zurich) photo series Fook Moon (2017/2020) is based on a performance, and shows portraits of, let’s say, human-like creatures, whose eyes, however, seem incredibly inhuman. At the same time a large graffiti sign on the wall warns against the ‘Biohazard’. Designed in the 1960’s, the symbol signals biological hazards from substances or organisms of biological origin—health waste, viruses or biological samples contaminated by microorganisms. It therefore alerts against infection and consequently also against the mixing of human and non-human matter, the hybrid being. In her video Holobiont Society, Dominique Koch (b. 1983/Lucerne, lives and works in Basel and Paris) traces the power relations of the capitalistic present, which act as a hybrid, sometimes conflictual system. In doing so, the artist recalls the biological idea of the ‘holobiont’, an organism in which hosts, microbes, bacteria, and viruses coexist. Finally, Pamela Rosenkranz (b. 1979/Altdorf, lives and works in Zurich and Steinhausen) shows two new paintings from the series Sexual Power, for which she consumes the synthetically produced substance Viagra while painting and mutates into a hybrid-like being by mixing her own human abilities with an artificially produced substance.

Postscript: I wrote the above lines at the beginning of February; the pandemic was only a vague rumor then. At the beginning of March, we decided to postpone the exhibition WE HYBRIDS! to half a year later. The world is a different place now. However, the questions posed by the artists and the thoughts inspired by them are still relevant, yes, perhaps more relevant than ever. The worldwide experiences of the crippling lockdown and the feverish search for a vaccine show us that some kind of coexistence with the virus is probably inevitable. Alike in a highly technological world, not only implanted microchips but also viruses make us into a kind of hybrid creature. They nest in our bodies—with consequences that can be fatal in different ways. At the same time, as a globalized society, we have recognized more than ever that the supposed hierarchies between ‘man’ and ‘nature’ are null and void. Inevitably I have to think of the kinship between humans, animals, and other creatures propagated by Donna Haraway, of her call to make oneself ‘related’, to enter into what is probably also a conflictual yet hybrid interweaving. And this too is probably a future version with which we must deal. 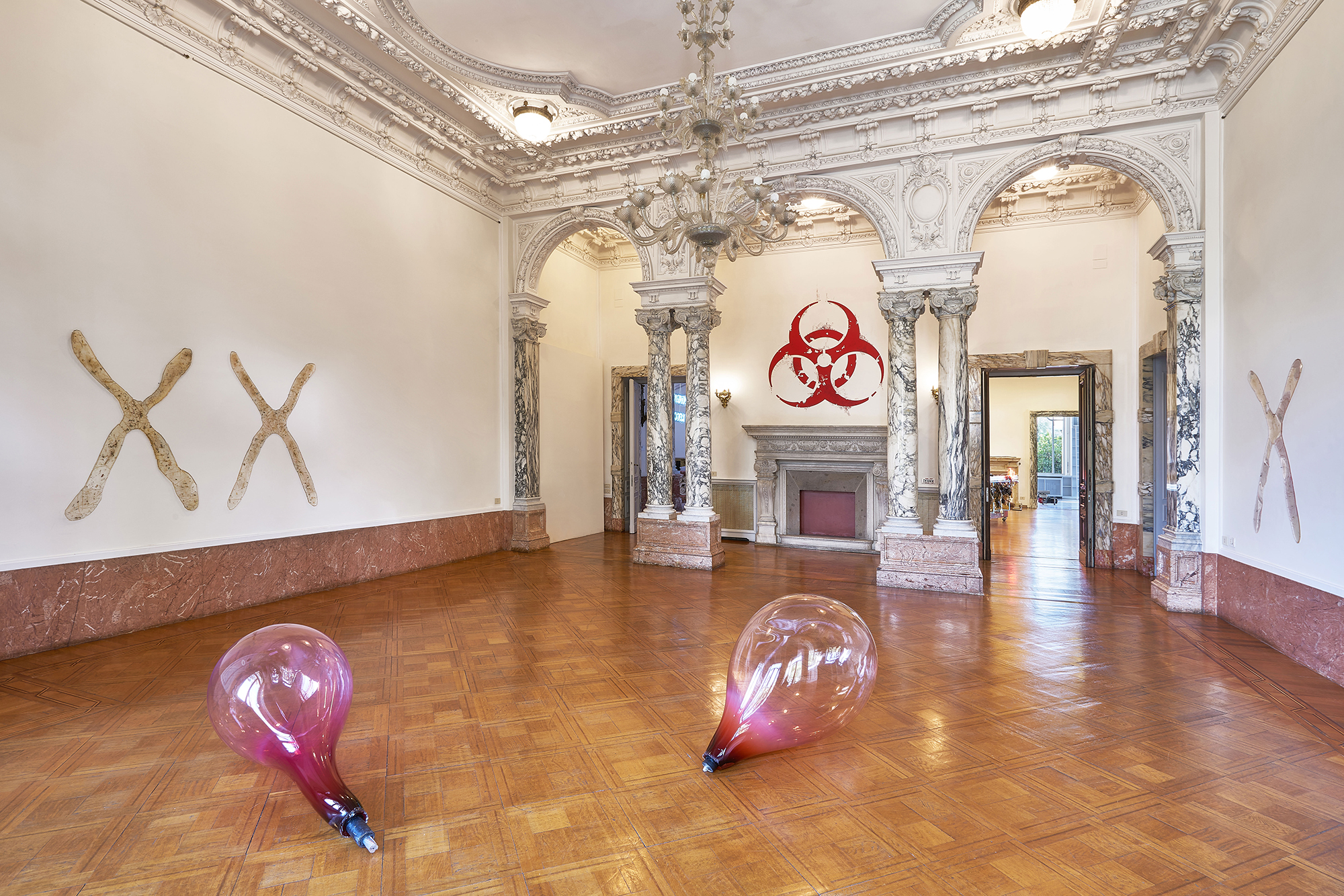 Along with the group exhibition WE HYBRIDS!, in the garden of Istituto Svizzero, Florian Germann’s EUROWOLF will be shown, as a new site-specific installation which connects Rome with the Villa Maraini’s hill. The sculpture modelled on the fur of a Romanian black she-wolf (female species are bigger than males, so the artist claims) is hanging from one of the tall trees in the park. Its reflective surface projects the sun’s rays into a specific point in the city. The object not only evokes the legend of the founding of Rome, but also creates a reference to the social organisation of wolf packs, structured as a social conglomerate. Finally, the “Wolfsmaschine”—in the words of the artist—is also linked to the theme of the exhibition WE HYBRIDS!, being a sort of hybrid between animal and machine. And how not to think of Romulus and Remus, nursed by a she-wolf and fed by a woodpecker.