The event is also the occasion to see the exhibition Real Estate by Mai-Thu Perret, on view within the spaces of Villa Maraini and in the garden.

Rumour has it thanks to Carolina Cappelli and Sebastiano Pala

Yva & The Toy George is the solo project of Iva Stanisic, a Rome-based musician and producer born and raised in Serbia. Her set includes the use of grooveboxes, synthesizers, acoustic and digital percussion and various vocal effects, resulting in a melting pot of sounds and genres ranging from electro, dance, hip hop and darker, arabesque, Balkan and experimental sounds. Yva sings in different languages using even made-up words. She recently released her latest EP, Stealth, on the Witches Are Back label.

ven3mo enjoys sharing highly energetic and sensitive DJ sets. She avoids being restricted by one specific music style and commits to the dance floor by making big splits. She considers the club as a propitious space for revealing affects and emotions.

The final event of the Roma Calling 2021/2022 residency, La Casa Ispirata presents itself as a moment of encounter and celebration, which completes in a choral way the experience shared by the residents during the months spent at Istituto Svizzero.

The title echoes the novel carrying the same name published in the 1920s by writer and artist Alberto Savinio and plays on the ambiguous meaning of the adjective ‘ispirata’ (which can mean both inspired and inspirited in English), directing attention to the multiple flows of energy that enliven the rooms and garden of Villa Maraini. Indeed, the evoked inspiration refers to the creative impulse that animates the production of the artists, researchers, and protagonists of the evening, but also alludes to a reinterpretation of the villa as a haunted house, populated by hidden presences and silent voices.

In between these two frames of meaning was conceived the architecture of the event, which set off with a collective reflection on some aspects that distinguish the co-habitation setting proper to residencies. The ‘accidental’ proximity to the professional and life paths of other people was often probed during the conversations that accompanied the weeks of preparation of the project, and some of the works presented arose precisely from synergies and collaborations, stimulated by the desire to deep dive and test this condition of temporary proximity. The exchanges generated dialogues between different interests and research methods, in a process of mutual enrichment.

The itinerary in which La Casa Ispirata unfolds begins at the Institute’s entrance on via Liguria and is designed to guide visitors through the spaces of the Dipendenza, the garden and finally the villa. The project consists of a series of installations, videos, sculptures, and performances that offer a glimpse into the practices of the residents along with some insights into the trajectories of inquiry they have pursued.
The transition from one environment to another is marked by a sequence of whispered words, temporary architectures, silent images and talking objects, which recompose the fragments of a complex narrative, that follows a line of ambiguity between reality and fiction by connecting different temporalities. Sometimes the haunting appears to be caused by past events creeping back into the present, according to dynamics that often have to do with appropriation processes or ideological manipulation, and with episodes of omission and removal. While in other cases, the ghosts show themselves as voices that may be perceived as contemporary, invisible, for they are little heard or perhaps because they are strategically sheltered.

On the threshold of the entrance on via Liguria, visitors will begin their tour from the first stage of the project born from the collaboration between archaeologists Caroline Bridel and Ilaria Gullo, writer Bruno Pellegrino and visual artist Vanessa Safavi. Structured in a sequence of audio stations that accompany the visitors to different spaces – from the red-painted front door to the mysterious portrait of the countess set up at the top of the staircase leading to the piano nobile, the main floor of the villa – the work offers fragmentary narratives, whispering episodes related to objects, furnishings and personalities who lived in these premises. Artist Martin Chramosta presents a new video in the Dipendenza, where visitors will stand before talking faces of animal statues that silently inhabit the urban space of Eastern European cities. He will also exhibit a series of new bas-reliefs that re-process forms and compositions of buildings’ facades, triggering a dialogue with the villa’s architecture. Under the collective name of ‘Fattucchiere’, artist Marta Margnetti and curator Giada Olivotto set up a habitable setting in the Sala Elvetica, where the public is invited to take a break and explore the texts, objects and other props that have guided and nurtured the duo’s work on feminist practices, magic potions, and private conversations during their ten-month residency in Rome. Art historian Mathilde Jaccard offers a visualization of ephemeral architecture, related to theatrical sets of Renaissance Rome, reconstructed through in-depth research which analyzes the fabrication of foundational myths by religious propaganda and political power of the time in both Rome and Florence.

The tour continues in the garden, where on one of the villa’s facades are three large banners made by researcher and political scientist Ari Ray, announcing three aphorisms that uncover an unexpected path of adaptation and persistence over the course of time of Antonio Gramsci’s thought. By reconstructing the events surrounding the ten district fountains designed and created by Pietro Lombardi in the late 1920s in Rome, the architectural historian and theorist Ilyas Azouzi together with visual artist Lou Masduraud concoct an act of boycott and resistance, which through the complicity of the visitors aims at silencing the fascist narratives still visible today in Rome’s public spaces. Under the loggia on the mezzanine floor of Villa Maraini, some performers interpret a text written by architectural historian and theorist Emma Letizia Jones, which enquiries about the recurrent waves of forms throughout the centuries, in dialogue with sculptural fragments confined into the walls of the portico. Finally, the itinerary includes a collaborative project by visual artist Reto Müller and architectural historian Jasper Van Parys, who bring their respective research into dialogue to reveal unprecedented perspectives on certain facts and objects related to the history and myths of Rome through an analysis of the mechanisms that structure the production of images and narratives in the cultures of yesterday and today.

To accompany the public during the tour of La Casa Ispirata, we will distribute a short publication produced for the occasion, intended as a notebook offering glimpses into the projects presented by the residents by collecting working materials, scattered words, and visual notes.

LOCALES is a curatorial platform founded in Rome by Sara Alberani and Valerio Del Baglivo – later joined in 2021 by Marta Federici – that aims to inspire a reflection on the public sphere through artistic practices. Through a series of site-specific programs involving commissions of new artworks, explorations of public spaces, educational activities, and performances, LOCALES addresses the complexity of contemporary urgencies starting from the political and social history of symbolic places in the city and their local communities.

Sara Alberani is an art historian and independent curator based in Rome. She expresses her curatorial research in socially engaged art practices concerning communities and public spaces, focusing on long-term projects. Since 2019, she has been part of the asylum seeker, refugee, and artists community Trampoline House in Copenhagen, and is curator for the collective’s upcoming participation in the next documenta15. Since 2020 She is co-founder of LOCALES, a curatorial platform for the production of site-specific interventions and decolonial practices within the public space of Rome; and Orchestre della Trasformazione, a public program combining artistic imagination with new strategies of action in the social sphere, co-curated with Visible (Cittadellarte – Fondazione Pistoletto/Fondazione Zegna) and supported by Palazzo delle Esposizioni, Rome. Her projects have been presented in numerous institutions in Italy and abroad, including documenta15, Biennale Arte e Architettura di Venezia, Centro Pecci, MAXXI, RomaEuropa Festival, Palazzo delle Esposizioni, MANN, Museo Nazionale Romano, Real Academia de España en Roma. She graduated with honors in Art History from La Sapienza University in Rome and in 2019-20 was selected curator for the Curatorlab master’s program at Konstfack University, Stockholm.

Marta Federici is an art historian and curator. She is interested in hybrid art languages, collaborative working methods, queer and decolonial feminisms. Her research investigates the connection between theories and practices, between poetics and politics, and explores how art relates to current social issues, by elaborating on different imaginaries. Since November 2021 she has worked as assistant curator at the Museo MACTE in Termoli. She co-directs the programming at the independent space Lateral Roma together with artist Mathias Ringgenberg and curator Geraldine Tedder. As part of the Locales collective, she co-curates with Sara Alberani the 2022 edition of the public program Hidden Histories, which includes meetings, performances, and workshops aimed at critically re-discussing Rome’s art-historical heritage. From 2015 to 2020 she worked at Sant’Andrea De Scaphis, a satellite location of the New York gallery Gavin Brown’s enterprise. She has written critical texts for artists, exhibitions, and catalogs and regularly collaborates with Flash Art and NERO magazine. She holds a master’s degree in Contemporary Art History from La Sapienza University and a second-level interdisciplinary master’s degree in Performing Arts and Community Spaces from Roma Tre University. 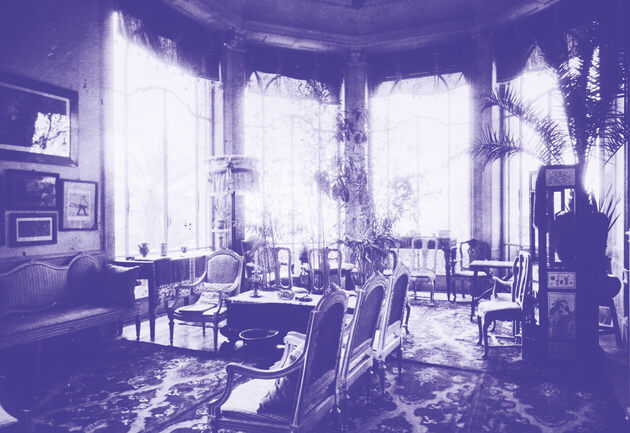 Giardino D'Inverno, Villa Maraini. From the Archive of Istituto Svizzero