The event will be held in English at H18:00 at Istituto Svizzero, via del Vecchio Politecnico 3, Milan.
Free entrance within the limited capacity of seats (registration at the door).

Architecture and music share an innate possibility: they can be composed, or literally put together. A composition is culturally influenced, formally shaped, as well as technically defined. While architecture’s permanence contrasts sound’s transience, they are both dependent of subjective perception, and thus engaged in daily life’s socio-political dimension.

These considerations resonate in the site-specific work of Li Tavor and Nicolas Buzzi Talking Measures or How to Lose Track, where strategically positioned custom-made objects open an acoustic and architectural realm for the listener. And so, architecture becomes the instrument.

The talk is curated by Victoria Easton, and it will confront sound and space while tracking their common measures. The discussion between the artists Li Tavor and Nicolas Buzzi, sound artist Attila Faravelli, and curator Gaia Martino will be moderated by Francesco Bergamo. It will be followed by a performance by Li Tavor and Nicolas Buzzi interpreted by the artist Harmony, and the artist and choreographer Teresa Vittucci. 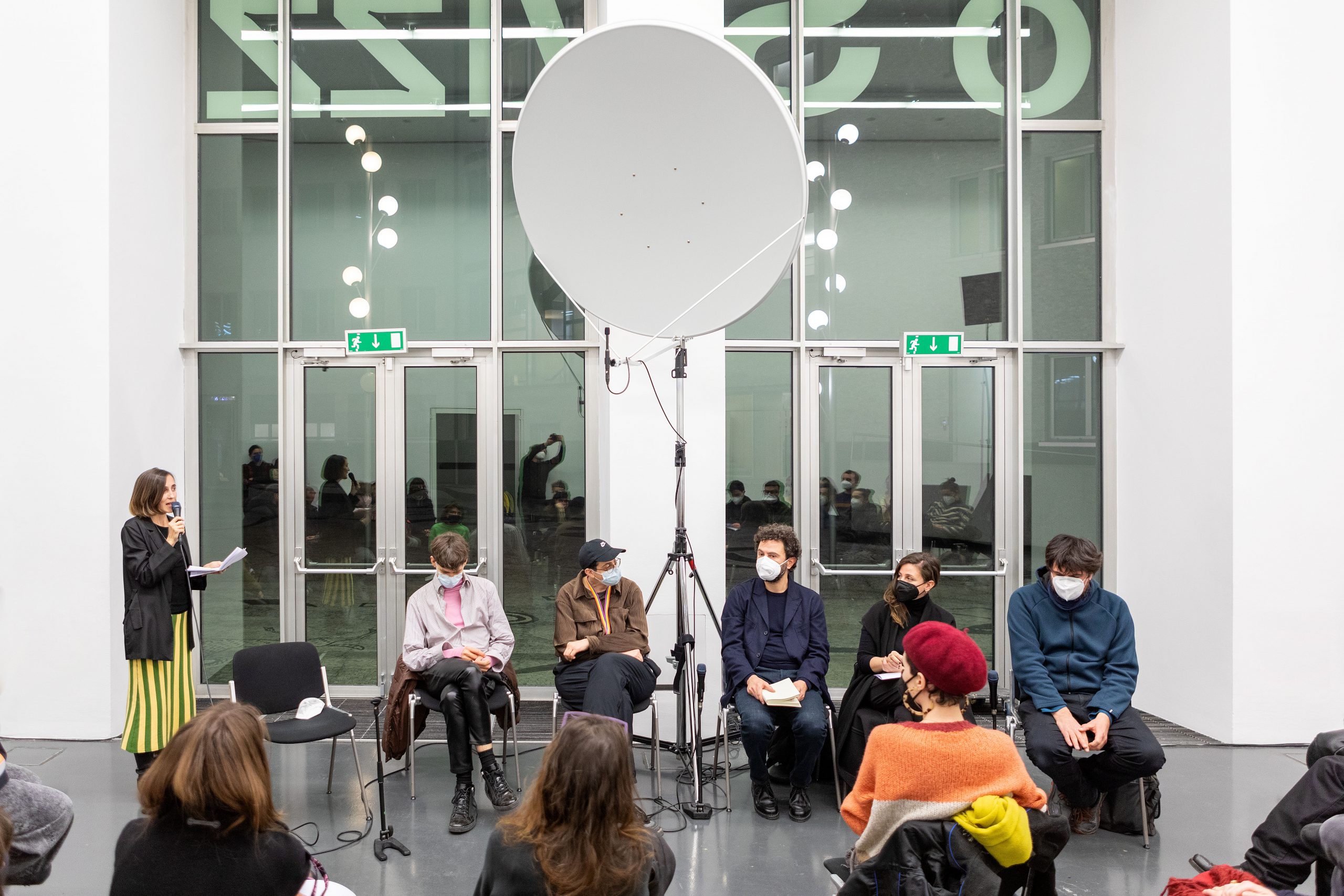 Francesco Bergamo, architect and Ph.D. in Sciences of Design, is assistant professor at the Università Iuav in Venice. His research focuses on the history and theories of drawing and representation in architecture, design, visual arts and sonic ecology. As a member of the Imago rerum team at the Iuav he worked with the composer John Luther Adams, with the artist James Turrell, on Jean-François Niceron’s theoretical production and on digital stereotomy. His recent works and publications are mostly about sound mapping and contemporary forms of representation, dealing with big data, algorithms and augmented reality.

Victoria Easton studied at the EPF Lausanne and at the ETH Zurich, where she graduated with a Master’s degree in Architecture in 2005. Since then, she has been a collaborator of Christ & Gantenbein: besides working on projects and acquisition, she manages Christ & Gantenbein’s publication and exhibition department. Parallel to her professional activity, she has always been involved in teaching, research and writing. In 2016, she curated the exhibition The Books of the Architecture of the City at Istituto Svizzero in Milan which focused on Aldo Rossi’s seminal book. A member of the Swiss Federal Art Commission since 2017, she is part of the jury of the Swiss Art Awards for art, curating and architecture.

Attila Faravelli is a sound artist and electro-acoustic musician from Milan. Within his practice, he explores the material involvement with the world around us. He has been publishing on Die Schachtel, Senufo Editions, Presto!?, Baloon & Needle, Boring Machines, Mikroton Recordings. He has been presenting his work in various academic and artistic institutions in Europe, USA, China and South Korea. In 2010 he participated in the 12th International Architecture Biennale in Venice. In 2012 he was the Italian curator for the Sounds of Europe project. He has been curating the sound for projects by, among others, Armin Linke, Rossella Biscotti, Kamal Aljafari, Riccardo Giacconi, Orthographe, Teatro Valdoca and Mariangela Gualtieri. He is part of the artist run space and sound research collective Standards in Milan. He is founder and curator for the Aural Tools project, a series of simple objects to document the material and conceptual processes of specific musicians’ sound production practice. Aural Tools are acoustic devices for relating sound to space, the listener, and the body in ways unavailable through traditional recorded media such as CDs or LPs.

Harmony is a fictional character created by Martina Buzzi, who first studied visual arts (Bachelor and Master in fine Arts, ZHdK), and is now studying electroacoustic composition as a second Master’s degree at the Zurich University of the Arts. Her work, situated at the intersection of music, installation, and performance art, revolves around possible interdependencies between people and the world they live in. She composes multi-layered moments and situations that even constantly evolve outside the moments of the performances. Martina Buzzi has exhibited at NAC Lithuania, Kunsthalle Fribourg, Architecture Biennale São Paolo, UG at Folkwang, VOLUMES at Kunsthalle Zurich, Upstate Zurich, Les Complices Zurich, Cabaret Voltaire Zurich, Caravan at Kunsthaus Aarau, Alpina Huus Geneva and Kunstraum Klingenthal, Basel.

Gaia Martino is a researcher and independent curator focused on the entanglement between spatial practices and sonic arts, with interests in positionality of the listening, embodied envision, and situated knowledge as a critical approach to the aesthetics of the sonic. She is a PhD candidate at Iuav Venice and UdK Berlin within the departments of Architecture and Sound Studies and Sonic Arts. She is also a co-founder and member of the first transdisciplinar research group oriented to sound at Iuav, Venice. Since 2015 she is part of the curatorial board at Standards, a collective project and flexible space for sonic arts and music, located in Milan. As an independent curator and editor she is a member of Archive Books – Journal – Sites, a community of cultural practitioners, a public program, and a publishing house based between Berlin, Milan and Dakar. She is the recipient of the On Board and MovinUp grants for curatorial research from MiBACT and GAI, respectively. She has collaborated with NABA, Biennale di Venezia, O’, SoundOhm, Blume Editions, Careof DOCVA, Errant Bodies, Fondazione Lazzaretto, Centrale Fies and Mixitè.

Li Tavor was born in Basel-Stadt in 1983 and currently lives and works in Zurich. She is an architect, graduated from ETH Zurich (MA), and a musician and composer, graduated from ZHdK in Zurich (MA in electroacoustic composition). Her practice includes design, compositions for ensembles, theater and film, performance, and installation. She was working as a research assistant at the department of architecture of ETH Zurich, was a guest professor at RMIT Melbourne and currently works as a lecturer for the BA in Fine Arts at ZHdK Zurich. Together with Alessandro Bosshard, Matthew van der Ploeg and Ani Vihervaara, she was selected by the Swiss Arts Council Pro Helvetia in 2017 to curate the Swiss Pavilion at the 16th International Architecture Biennial in Venice, where their exhibition Svizzera 240: House Tour was awarded the Golden Lion for Best National Participation. Furthermore, her work was shown at Theaterspektakel Zurich, Theater Gessnerallee Zurich, NGV Melbourne, The Architecture Foundation London, CIVA Brussles, Arsenic Lausanne, Tanzquartier Vienna, Tanzfabrik Berlin, Tanzhaus Zurich, Kölnischer Kunstverein, Taylor Macklin Zurich, Kunsthaus Bregenz, Piano Nobile Geneva, Stadtgalerie Bern, Sharjah Architecture Triennial, The Swiss Art Awards, São Paulo Architecture Biennial.

Teresa Vittucci was born in Vienna and graduated from Vienna Conservatory, The Ailey School, Salzburg Experimental Academy of Dance (SEAD) and the University of Arts Berne where she received her Masters in Expanded Theater. Since 2013 she has been developing a solo practice through her works Unleash  (2012), Lunchtime (2015), All eyes on (2017) and Hate me, tender (2018). She has collaborated with several artists and institutions including Staatstheater Mainz, Benny Claessens, Simone Aughterlony, Marie Caroline Hominal, Trajal Harrell, Gil and Nils Amadeus Lange, whom she made the duo U Betta Cry (2013) with. Sparked by a carte blanche invitation of Centre Culturel Suisse in Paris, Teresa curated Shameless festival in February 2020. Her works are being presented and toured internationally. Teresa has received the ImPulsTanz danceWEB scholarship 2013 (Ivo Dimchev), the Foreign Study Scholarship of the Austrian CultureMinistry (BKA), the Startstipendium scholarship from BKA as well as the TURBOResidency at ImPulsTanz 2014 and 2018. She was awarded the Recognition prize by the city of Zürich for her work as an outstanding performer and received the Swiss Dance Prize for her work Hate me, tender. As of 2019, Teresa is Young Associate Artist (YAA!) at Tanzhaus Zürich.