The French expression ‘toujours’ refers to a temporality—always, all the time. At the same time, it also contains the phrase ‘Tous les jours’. All the days. TOUJOURS is a collaboration between Istituto Svizzero and the students of the Bachelor of Fine Arts program at the Zurich University of the Arts (ZHdK) and were created in the class of Nadia Graf and Thomas Julier.
The large LED screen placed on the roof of the corner building in Piazza Cavour, Milan—where not only the exhibition spaces of Istituto Svizzero, but also the Consulate of Switzerland and the restaurant ‘Swiss Corner’ are located—serves before and after Christmas on selected dates: ‘toujours’ as a display for a series of artistic works and interventions. The Piazza is a place where people pass by every day on their way to work, a place that is very familiar to them. The display: a place of public announcements—anonymous and distant. But currently also a place that remains open to the public during museum closures due to the pandemic. A platform for culture-creating impulses, a shared screen.

From 18 to 22 of December, four students presented their works, and from 14 to 23 of January will be presented ten more works, while the 25 of January the LED screen will host all the projects in loop.
What commons the artistic works is their playful approach to the site, which is as everyday as it is exposed, and their examination of the peculiarities of the curved LED screen and its almost gigantic size. Furthermore, the students’ works are also a reflection on the presence of screens in public and private life and the questions of how they change our perception of the world, or how digital media generate new forms of publicity. In this case, it is not only the people of Milan who are confronted with a screen while viewing the artworks in Piazza Cavour, but all of us. As a stage for joint discussions about the artistic works via videoconference, screens were in fact omnipresent in the process of creation as well. Accordingly, screen culture was a theme that accompanied the development of the works: at home, in class, in dialogue between members of the Istituto and ZHdK, and finally in Piazza Cavour.

Here you can find the list of the students of the Bachelor of Fine Arts program at the Zurich University of the Arts (ZHdK) coordinated by Nadia Graf and Thomas Julier: 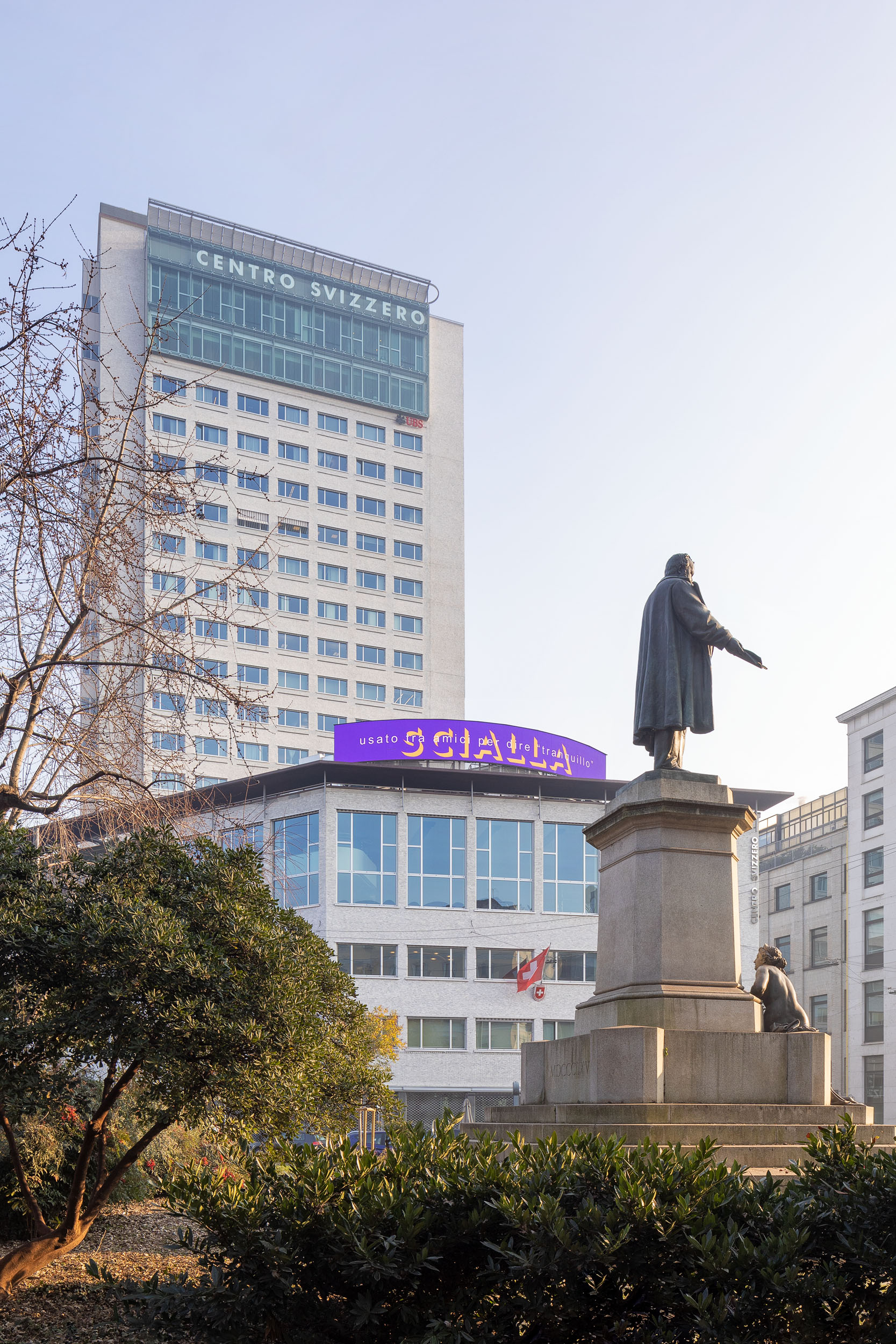 Suphansa Buraphalit has developed the work Dizionario Gen Z per Milano for the LED screen in Piazza Cavour. For this, the artist researched expressions and phrases of the so-called ‘Generation Z’, which includes people who were born in the first two decades of the 2000s and can easily navigate the digital space and intuitively deal with the corresponding devices, apps or platforms. A generation, therefore, for whom a screen also means the gateway to the world. The ‘Dictionary for Milano’ brings together terms that are familiar or unfamiliar to us, depending on the generation to which we belong, and shows us that language is not a static construct, but is constantly changing and adapting.

Elena Corvaglia projects in her work For sale. Tap water occasionally (2014-2020), private and quite normal, everyday spaces onto the large screen. Private spaces, however, that are already public in a certain sense, as the artist works with image material that she found on real estate portals from her homeland, eastern Ukraine, which is occupied by pro-Russian separatists. The intimate glimpses of foreign bathrooms or unmade  bedrooms seem alienating, almost discomforting on the large screen. They irritate us with the omnipresent plastic buckets and other containers. Elena Corvaglia thus points to a problem of her war-damaged homeland: in many houses, the water supply functions only inadequately, and people have to store water reserves in plastic buckets.

Julius Peter Jenny also creates glimpses in his work Untitled (2020), which he shows large on the LED screen. His spaces, however, are of a fantastic, even surreal kind. The artist, who actually primarily paints, uses the digital peculiarities of the screen to translate his paintings into another medium, to transform them into another space. Illuminated by strange suns and enigmatic light sources, placed between shimmering fabrics and draped cloths, we see rendered landscapes with bare trees, classical still-lifes or entwined bodies. These fantasies, landscapes and scenes were created on the computer screen and in the labyrinthine architectures of 3D computer programs. High above Piazza Cavour, they open up a different, mysterious world that is as attractive as it is uncanny.

Thank you all for the wonderful comments (2020) is the title Sebastian Eduardo Roldan Palomino has given to his work, which consists of YouTube screenshots. The artist has discovered an obviously widespread and humorous phenomenon: people comment on music videos on the digital video platform in which their brothers, aunts, wives, mothers or children appear. In the comments’ columns, we read, for example, “Mio padre – voce unica”, “THAT’S MY DAD!!!”, “This is actually my grandmother!”. Thank you all for the wonderful comments probably reminds us not only that in the digital space private and public sometimes overlap in a strange way, but also of the fact that singing together at Christmas will probably be a bit different in the pandemic year 2020.

Zoé Wagner presents the work Non fermarti (2020), in which she deals with the concept of ‘sequence’, i.e. a succession, which can also denote a sequence of film shots, of neurons, of similar musical sections at different tonal levels, or of dance steps. The artist focuses on the latter: feet move dancing across a mirrored floor, executing a sequence of steps unknown to us. Standing at the bottom of Piazza Cavour, I look up at these feet – oversized and far above street level. And perhaps I suddenly notice that the feet of the people around me are also performing – sometimes hastily, sometimes less hastily – countless different sequences of steps.

The work The Local Video (2020) by Jan Stolze is an approach to a place, to an urban context. The camera seems to slowly move along facades and window fronts, sometimes a piece of sky appears. Presented on the large screen in Piazza Cavour, The Local Video generates a doubling. We see the facade of the ‘Swiss Center’ built between 1947 and 1952 by Swiss architect Armin Meili – on whose front building the LED screen is mounted. And we see the remains of a medieval city gate – in front of us on the screen and to the right of it, in ‘real’. Jan Stolze has never been to Piazza Cavour in Milan. He explores the place with Google Streetview. A tool that we are all familiar with for a long time, that brings the world out there to us, onto our phone and computer screens.

Welcome to the Private Show (2020) calls Lisa Elena Mauriello her work, which she developed especially for the LED screen. The camera slowly moves over draped pieces of fabric and pink glitter particles. The artist plays with the meaning of privacy and publicity. She presents a (perhaps her?) ‘Private Show’ oversized and visible to all who pass by in a public square in Milan, definitely asserting a moment of intimacy. Lisa Elena Mauriello’s work may thus also be a reference to the blending of public and private spheres accelerated by social media. After all, we do not just see cat videos or political statements on Instagram or TikTok, but sometimes also participate in other people’s private lives.

“Oh, baby, don’t hurt me” I read large on the LED screen and the melody continues to hum in my head. For his work Karaoke (2020), Jonas Tim Moser collages the lyrics of famous pop songs as they are used in karaoke bars and can also be found on YouTube. These are songs that we probably all know and have sung along to somewhere at the top of our lungs and in weird tones. Significantly, Karaoke doesn’t need a sound for this. Because the melodies are already humming in our heads. Let’s see if anyone finds the courage to sing along in Milan’s Piazza Cavour.

With Ten days in quarantine (2020), Viviane Johanna Porret takes up a topic that has become unexpectedly familiar to us all. Quarantine, i.e. temporary isolation, is currently being propagated as a means of containing the pandemic. However, both the term and the concept are much older: it was already common in ancient times to isolate sick people, while the word ‘quarantine’ in the Romance languages refers to the 40 (Italian: quaranta, French: quarante) days that arrivals suspected of being infected had to isolate themselves, for example at the port of Venice. We humans can cognitively comprehend this temporary isolation and sometimes occupy ourselves with baking sourdough loaves – but what about the dogs, who must endure the quarantine? Viviane Johanna Porret shows pictures of dogs lying on sofas or beds and reminds us that their perception of the world is sometimes different.

Rebecca Solari names her work Per Sempre, a sort of collage or montage with multiple versions of herself. The artist’s face is mounted in various found and specially created graphics, repeatedly combined with the words ‘Forever Solari’ or ‘Per sempre Solari’, once we even read ‘Solari Show’. The artist thereby refers to the entertainment industry and also to shows like ‘Big Brother’ (‘Grande Fratello’) or other formats, with which people became famous out of nowhere and enjoyed a lot of media attention, especially in Italy.

In her work Skewed to be suitable (2021), Flavia Trachsler creates a space, a narrow, confining space. Looking at the LED screen, this space opens up before our eyes. In it we see figures, their long arms and legs squeezed by the constricting space. Skewed to be suitable can in this sense be read as a kind of metaphor. A metaphor, perhaps, for the current pandemic situation, in which all our movements are restricted, but also a metaphor for existence in a society, in a world in which norms and rules can sometimes have a constricting effect.

Guess what? is what Anastasia We calls her work and in this sense formulates an invitation to look closely and guess. And by the way, the artist explains, everyone can guess, whether old or young. The motifs drawn with quick strokes – cherries, a baseball bat, penguins or rockets – actually pose a kind of pictorial riddle and come together in our minds to form their very own and ever new stories.

Gamer Over we read in large black letters on a bright green background. His work, says Carlo Schwager, was inspired by the so-called ‘Storming of the Capitol’ on January 6, 2021, when violent Trump supporters stormed the government building in Washington. While memes actually circulated on social media commenting ‘Game Over’ to attackers who failed at barriers, the artist wants to shake up our perceptual habits. “Was it just a dream?” he asks us, and we are shocked to discover that we are not in a dystopian computer game, but in a reality that is no less dystopian.

Roldan Palomino, Sebastian Eduardo, 'Thank you all for the wonderful comments', 2020. © Giulio Boem.