Le caselle di Anton Bruhin, (**i.e. Anton Bruhin’s “boxes”, “squares” or “pigeonholes”**) is to serve as the motto of the exhibition, referring to the artist’s creative approach and the various facets of his oeuvre. The show covers every period in Bruhin’s artistic career, though giving particular prominence to his drawings in digital and analog form, for his *pictograms and glyphs* can be regarded as the nexus to his artistic strategies in which he runs through all the possibilities within a clearly delimited playing field. Exciting connections then form between his various series of works: the use of pixels as mosaics, for example, in his suprematist Mickey Mouse, just as in the Hice for Weiss series he dedicated to his friend and fellow artist David Weiss, which in turn features much of the formal vocabulary of his drawings. Bruhin’s pictures of ruins reflect his interest in architectural conventions and the conviction that a dilapidated house is every bit as worthwhile a subject for pictorial depiction as pretty flowers or a bale of straw, a likeness of the painter himself or the skulls of the dead.

As part of the exhibition there will be a media center – curated by Piattaforma Fantastica in collaboration with Emanuele Carcano of Alga Marghen – presenting Anton Bruhin’s work as a musician, through a selected discography, flanked by drawings of his work 11 Heldengesänge & 3 Gedichte (1977), to emphasize the strong interaction between his visual and musical production. For the occasion Alga Marghen will present a collection of field recordings of bird songs recorded by the same Bruhin, published in an inedited quadruple box.

In addition, on Thursday 19 November the exhibition will host a musical event in which the musicians Luca Garino, Lettera 22 and Papiro will perform three different live-sets inspired to Anton Bruhin’s musical research.

In the 1960s, Anton Bruhin (b. 1949) first began organizing happenings and performances, designing and typesetting his own books, which he self-published with Hannes R. Bossert through April-Verlag, drawing, and writing prose and poetry. It was mainly his drawings and poetry that attracted notice in the ’70s. As an exponent of the nascent bohemian and contemporary art scene at the time, his works were included in epoch-making exhibitions, such as Mentalität Zeichnung (Kunstmuseum Luzern, 1976), Saus und Braus (Strauhof Zurich, 1980) and Bilder (Kunstmuseum Winterthur, 1981).

In the 1980s, Bruhin turned primarily to painting landscapes and townscapes en plein air, whilst also painting interiors and portraits of friends and acquaintances. And in the ’90s, he focused mainly on music and poetry, composing palindromes and other forms of experimental lyric poetry, and devoting himself extensively and intensively to one of the oldest instruments in the world, the Jew’s harp (aka scacciapensieri in Italian, Maultrommel or Brummeisen in German, Trümpi in Swiss German). After the turn of the millennium he returned to pictorial art, painting, drawing, working on digital pictorial worlds and his DIY publishing strategy. Every year Bruhin puts together a new little artist’s book and prints and sends out a small quantity to his personal circle.

After an apprenticeship in typesetting, Anton Bruhin was a member of the first class to study at the F+F School with Serge Stauffer, famous art teacher and specialist in Marcel Duchamp, where he came into contact with concrete poetry, Fluxus and experimental music. These genres have interested him ever since, inspiring him to produce vinyl records (e.g. Vom Goldabfischen, 1970, and rotomotor, 1978), experimental poetry (e.g. Reihe Hier) and palindromes (1991-2002 Spiegelgedichte). Dieter Roth and André Thomkins are recognizable influences, as are Philippe Schibig and Friedrich Kuhn – a generation of artists on the cusp of the transition from late modern to “contemporary art”, who in recent years have increasingly been the focus of an art historical re-examination. Like Bruhin, they combine themes of excess and chaos with a pragmatic interest in graphic solutions and simple structural schemas. He clearly enjoys serial approaches, taking pleasure in setting his own parameters and producing visual grammars, which are sounded out, extended and expanded to explore their every possibility and permutation. Having tested such an array, he then builds another system in which to seek all the statements that can possibly be constructed within those parameters.

Bruhin exemplifies a generation of Swiss artists who build on the recent past, always playfully subverting it, too, and liberating it from existential pathos, as in the early works of David Weiss or Markus Raetz, with whom he resided in the Swiss artists’ village of Carona (some drawings from this period, e.g. the Quink and Objekte series, are included in the present exhibition). The upshot of a sea change in Swiss art, Bruhin’s work was itself an impetus for Swiss contemporary art as it first took form in the late ’60s with artists like Urs Lüthi, Manon and Jean-Frederic Schnyder in close connection with the alternative and hippie subculture movements of the period. 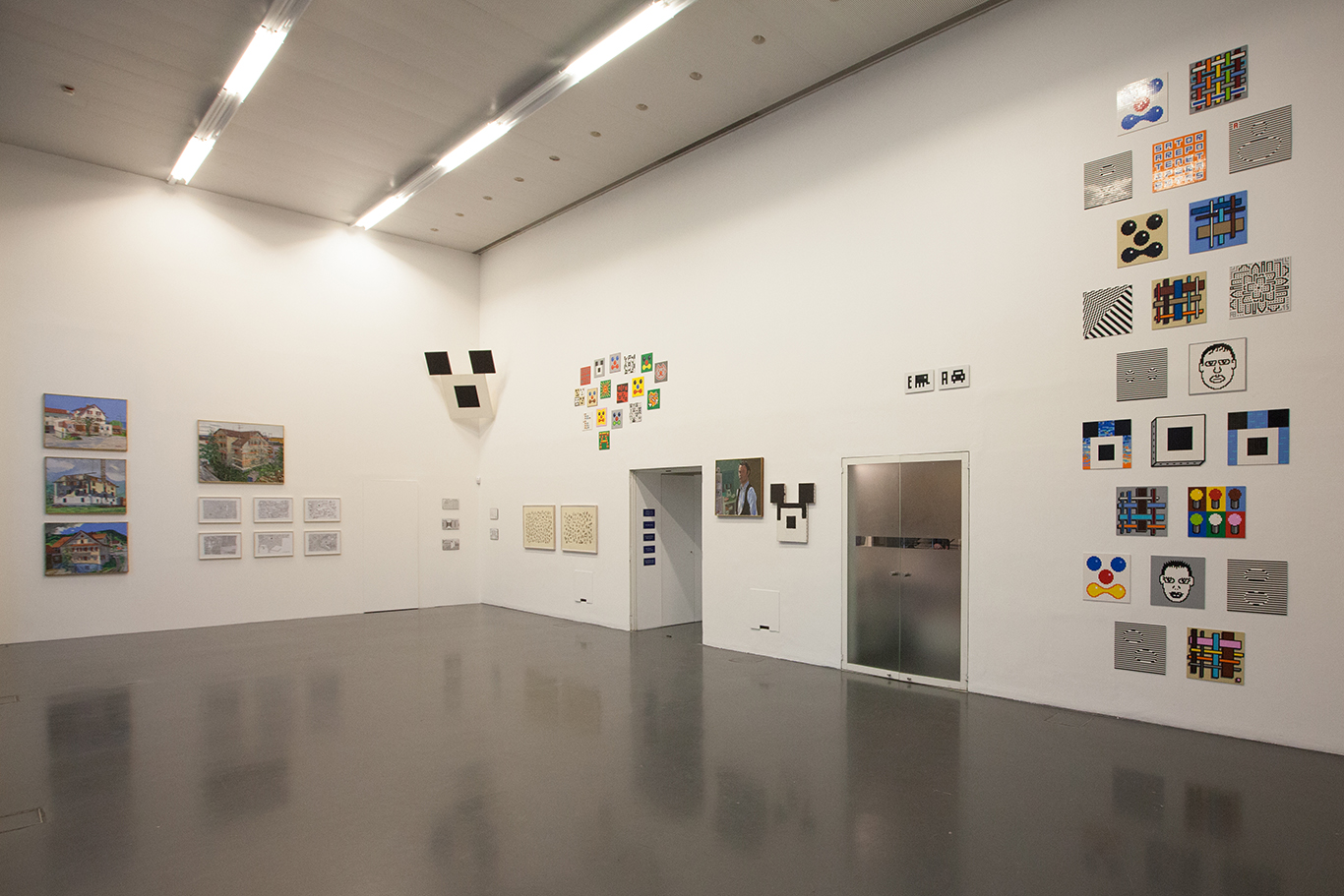