Istituto Svizzero has selected for this year six artists and six researchers in the fields of Visual Arts, History, Assyriology, Latin Epigraphy, Cinema, Juridical Anthropology, and Art History for its transdisciplinary residency programme Roma Calling, and a designer and researcher for its residency programme Milano Calling. The programmes are built on research, creation, and development of different disciplines and scientific practices.

Running parallel to these, and premiering this year from the month of September, Palermo Calling, a new programme of specific residencies. Two young artists or researchers whose studies focus on the Mediterranean, History, Art History, and, in particular, related to migration will be hosted at Palazzo Butera in Palermo for three months.

On 27 September, all 2019/2020 fellows will present in Rome, to the invitees, their ongoing research projects. September Calling is both an evening to present the Fellows as well as a unique opportunity for the public to get to know them better.

The evening will then open to the public with a double concert in collaboration with Montreux Jazz Artists Foundation. The Istituto’s garden will host the concerts of the electronic-folk band MAREY, founded by Maryam Hammad and Aurèle Louis and, to follow, the ethno jazz band Trio Mezcal [Pippi Dimonte (bass), Alessandro De Lorenzi (guitar), and Lorenzo Viale (drums)].

On the same night we will present Mario Merz’s work, Pittore in Africa (1989), a neon which will glow over the Istituto for a year.

H17:15 Presentation of the Fellows’ projects

Valentina De Santi (Geography History)
Valentina De Santi (1982, La Spezia/Paris) studied International Development and Cooperation as well as Geography and Territorial Processes University of Bologna. In 2016 she completed a PhD. in Historical Geography at the University of Genoa in co-tutorship with the École des hautes études en sciences sociales in Paris where she disserted her thesis. She is currently a post-doctoral researcher of the Synergy project, part of the Swiss National Science Foundation: “Milan and Ticino (1796-1848). Shaping spatiality of a European Capital”, directed by the University of Lugano – Archivio del Moderno, in partnership with the University of Lucerne and the Université Paris 1 Sorbonne-Panthéon of Paris. Her project analyses the contribution of military engineers in the establish-ment of “Milan capital” and in the construction of a new land use.

Tania Grace Knuckey (Textile Design and Multimedia Arts)
Tania Grace Knuckey (1987, Geneva) graduated from the Design Academy in Eindhoven in 2009 and the Royal College of Art in London in 2012 with a Master’s degree in Mixed Media Textiles. She has won numerous awards, amongst others the Marianne Straub Travelling Scholarship from the Royal College of Art in 2011, The Future of Beauty Award in 2012 from the International Flavours and Fragrances (IFF), and the first prize for the Best Interior Fabrics from Textprint. Tania was selected by the city of Geneva for a residency at the Maison Des Arts du Grütli from 2016 to 2019 .

Yasmine Hugonnet (Choreography, Contemporary Dance, and Research)
Yasmine Hugonnet (1979, Lausanne/Pantin) studied at the Paris Conservatoire National Supérieur de Musique et Dance. She holds an MA degree created jointly by Codarts in Rotterdam, School of New Dance Developement in Amsterdam and Institute of the arts Arnheim. In 2006 she won a residency in Ljubljana, Slovenia. She produced the trio RE-PLAY (2006) and the solo Latitudes de Pose (2007), which were shown in numerous festivals. From 2009 to 2013 she undertook a long period of research followed by the foundation in Lausanne of her company Arts Mouvementés. Soon after she produces three solos: Le Rituel des Fausses Fleurs (2013), Le Récital des Postures (2014), La Traversée des Langues (2015). In 2016 she choreographed La Ronde/Quatuor at the Rencontres chorégraphiques Internationales de Seine-Saint-Denis Festival and at the Venice Dance Biennale. In 2017 she participated in the Festival Commun (Arsenic, Lausanne). In 2017, Yasmine Hugonnet received the Swiss Dance Award for the solo Le Récital des Postures. She is currently working with the Vidy Theatre in Lausanne where she conceived CHRONOLOGICAL/TRIO in 2018 and will produce Seven Winters in 2020.

Jasmine Keller (Writing)
Jasmine Keller (1986, Endingen/Zurich) completed an MA in German Language and Literature at the University of Zurich in 2018. She has participated in numerous literary events and public readings such as the Poetry Brothel (New York and Paris) and as part of the writer’s group “Jung im All” based at the Literaturhaus Aargau (Lenzburg). In 2014 she participated in the “Industrial Radio” project of SZENART in collaboration with Radio Kanal K (Aarau). In 2018 she published the Christmas story Metallisée in the special edition of the Geldpresse of the Office for Debt Prevention of the City of Zurich. In 2013 she won the semester award from the University of Zurich for her thesis on Judith Butlers Frames of War and, in 2019, the OpenNet Schreibwettbewerb of the Solothurn Literary Days with the short story gehörnt.

MAREY
MAREY distinguish themselves by playing with unconventional and genuine arrangements and instrumentations. Guitars,drums, cello and synthesiser meet a soft voice with high recognition value and melt into a unique alternative rock sound that gets under your skin.
The duo, consisting of Maryam Hammad (voice & folk guitar) and Aurèle Louis (cello & electric guitar), is accompanied by other talented musicians such as Sacha Ruffieux and Julien Revilloud (lead guitar/ bass guitar) and Luigi Galati (drums).

Trio Mezcal
Trio Mezcal was born in 2016 and has been trying to overcome the stylistic boundaries of “genre” and has always focused on maintaining its creative and communicative naturalness, starting with the compositional and timbre peculiarities which were born from the merging of Afro-Mediterranean culture and electric guitars from the contemporary western world, together with a strong Northern European jazz influence. 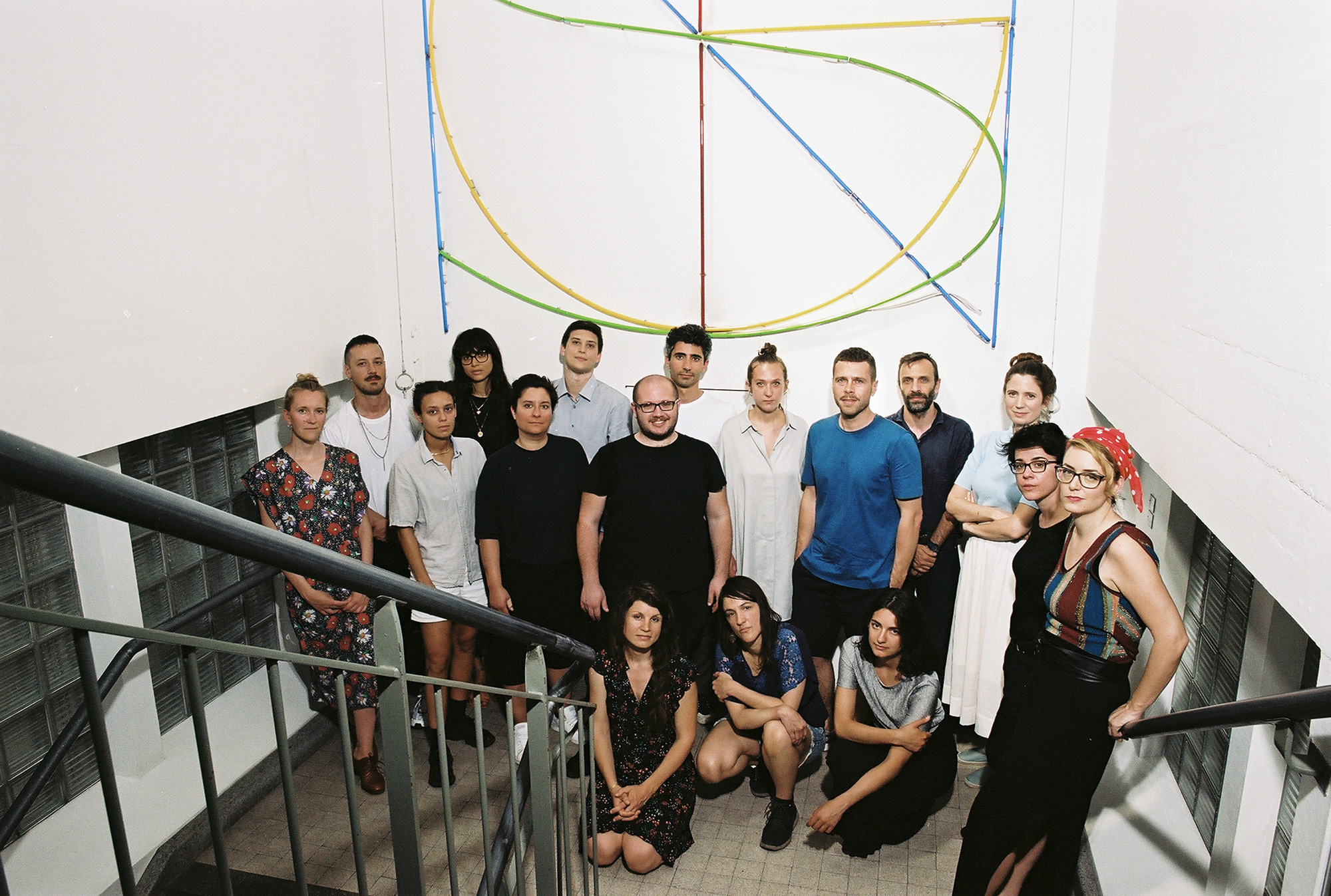 Armando Bramanti (Assyriology)
Armando Bramanti (1989, Palermo), took a BA in History (2010) and a MA in Archaeology at La Sapienza – University of Rome (2012); he then obtained a PhD in Assyriology in cotutelle between Sapienza and Friedrich-Schiller-Universität Jena (2017). After a post-doc research period at the The Spanish National Research Council (CSIC) in Madrid, he is currently working (2018/2019) at the University of Geneva—thanks to the Swiss Government Excellence Scholarships (ESKAS) programme—on a project of wedge-shaped palaeography. His research at Istituto Svizzero will focus on the historical geography of southern Mesopotamia in the third millennium BCE. He is also preparing for publication his doctoral thesis on land management in Early Dynastic Mesopotamia.

Romeo Dell’Era  (Latin Epigraphy)
Romeo Dell’Era (1992, Lugano) studied Antiquities at the University of Lausanne, obtaining an MA degree in 2017. He is currently working on a doctoral thesis in Ancient History in cotutelle between the University of Lausanne and Sapienza University of Rome, for which he received a grant from the Swiss National Science Foundation. The thesis work aims to bring together the two lines of research of studies on epigraphic habit, very active since the 1980s, and studies on the Alps in antiquity. He is also preparing an edition of the Roman inscriptions of the Canton of Ticino. He is an associate researcher at the Centre for the History of the Alps (Università della Svizzera Italiana, Accademia di Architettura) for 2019-2020.

Francesco Dendena (Modern History)
Francesco Dendena (1981, Milan/Paris) studied History at the Università degli Studi di Milano and completed a PhD in History in 2010 in cotutelle between the EHESS in Paris and the University of Milan. In 2012 he won the François Furet Prize, awarded by EHESS for his doctoral thesis. He is currently working on a post-doctoral project with the University of Lugano, which is part of the “Milan and Ticino (1796-1848). Shaping spatiality of a European Capital” project. In Rome he will research libraries and book policies during the Jacobin Rome (1798-1799) and study the transformations introduced by the French invasion and the subsequent republican experience on the public library system in Papal Rome.

Pauline Julier (Visual Arts and Film Direction)
Pauline Julier (1981, Geneva) studied at the École Nationale Supérieure de la Photographie d’Arles I and obtained the MA SPEAP, Programme d’Expérimentation en Arts et Politique, Science Po (Paris). Her films have been shown in contemporary art centres, institutions and festivals around the world: the Centre Pompidou (Paris); the Loop Festival (Barcelona); Visions du Réel (Nyon); the Tokyo Wonder Site; the Centre d’Art Contemporain Genève; the Museum of Modern Art in Tanzania; the Cinémathèque (Toronto), and the Pera Museum (Istanbul) among others. Julier received the Prix d’art fédéral suisse in 2010. She was invited by the Fondation Pinault to participate in an exhibition at Palazzo Grassi (Venice), she had a solo exhibition at the Centre culturel suisse in Paris (CCS) in 2017; she has participated in the Biennale of Media Art in Chile in 2019, and will be part of Bruno Latour’s next exhibition at ZKM (Karlsruhe) in 2020. Pauline Julier is currently working on a new cycle of plastic research and writing her first feature film.

Charlotte Matter (Art History)
Charlotte Matter (1983, Lyon/Zurich) studied Art History at the University of Zurich and completed an MA degree in 2015. She is research assistant at the Institute of Art History at the University of Zurich where she coordinates the MA programme “Art History in a Global Context”. She is currently working on a doctoral thesis on plastic as a material in art in the 1960s and 1970s, with particular interest in the works of two artists who worked in Rome: Carla Accardi (1924-2014) and Laura Grisi (1939-2017). For her thesis she received a one-year scholarship—commencing September 2019—from the Bibliotheca Hertziana which supports the research project “Rome Contemporary”.

Nastasia Meyrat (Visual Arts)
Nastasia Meyrat (1991, Lausanne) studied art at the HEAD–Haute école d’art et de design in Geneva, where she obtained an MA degree (Work.Master) in 2015. Meyrat was selected in 2018 for the Kiefer Hablitzel Göhner award, within the framework of the Swiss Art Awards. She was artist in residence at the Davidoff Art Initiative in 2017 in the Dominican Republic and at the 4th Ghetto Biennale in Port-au-Prince (Haiti) in 2015, where she worked on a cultural exchange project with her anthropologist sister. She was selected for the New Heads – Foundation BNP Paribas Art Awards in 2015, in conjunction with the group exhibition “GET OUT”, curated by Latifa Echakhch. She has exhibited at Zabriskie Point  (Geneva); Urgent Paradise (Lausanne); La Placette (Lausanne); Morel art space (Lugano); Motto (Berlin); One Gee In Fog (Chêne-Bougerie); Casa Quien (Santo Domingo); and Ferme de la Chapelle (Lancy). Between 2018 and 2019 she was part of Tunnel Tunnel, an independent art space in Lausanne.

Real Madrid alias Bianca Benenti Oriol & Marco Pezzotta (Visual Arts)
The artist duo Real Madrid was founded in 2015 by Bianca Benenti Oriol and Marco Pezzotta. Bianca (1987, Turin) took her Work.Master at HEAD – Haute école d’art et de design in Geneva in 2016. Marco (1985, Seriate) studied at Brera Academy of Fine Arts (Milan) and at the Kunsthochschule Berlin-Weißensee. Real Madrid’s work has been exhibited in 2019 at Forde (Geneva); SansTitre (Paris); Auto Italia South East (London); Galerie Maria Bernheim (Zurich); and Migros Museum für Gegenwartskunst (Zurigo); in 2018 at EXILE Gallery (Berlin) and GAK Gesellschaft für Aktuelle Kunst (Bremen) and in 2017 at O’ Artoteca (Milan); LIYH (Geneva); Silicon Malley (Lausenne); and 1.1 (Basel). In 2017 the collective was chosen as finalist for the BNP Paribas Prize and invited to Sao Paulo (Brazil) by the Goethe-Institut. In 2018, the artists were awarded the Swiss Art Award in Basel and were finalists of the Bourse de la Ville de Genève at the Centre d’Art Contemporain. In the same year they participated at the Research-Residency of Pro Helvetia Johannesburg and at the FAAP Foundation in Sao Paulo (Brazil).

Kiri Santer (Legal Anthropology and Political Sociology)
Kiri Santer (1991, Lausanne) studied Anthropology, Comparative Literature and Middle Eastern Studies at the Universities of Geneva and Neuchâtel. She completed an MA degree in Anthropology and Sociology at the School of Oriental and African Studies (SOAS), University of London in 2015. She is the current recipient of a “Doc.CH” grant (excellence funding scheme) by the Swiss National Science Foundation for her PhD in Political Sociology and Legal Anthropology at the University of Bern. In Rome she will carry out research for her dissertation on the emergency of the Libyan Coast Guard and the recent transformation of the external border of the European Union in the central Mediterranean. Since 2017 she has been editorial assistant at the Anthropological Theory journal.