The duo Fattucchiere (Giada Olivotto and Marta Margnetti, Fellows Roma Calling 2021/2022) invites you to take part in the event RⱯDURⱯ, the presentation of a collection of performative, musical and installation contributions, through a psychic path that will take place among the various greens of the hill. At sunset, in the RⱯDURⱯ of the flowery garden of Istituto Svizzero, live performances by Rada Koželj and VÍZ will be interspersed. The ৺ ෴ ❃ ර ∇  ﹌﹌ collective will accompany the evening by offering an ointment, fragrance and drink. 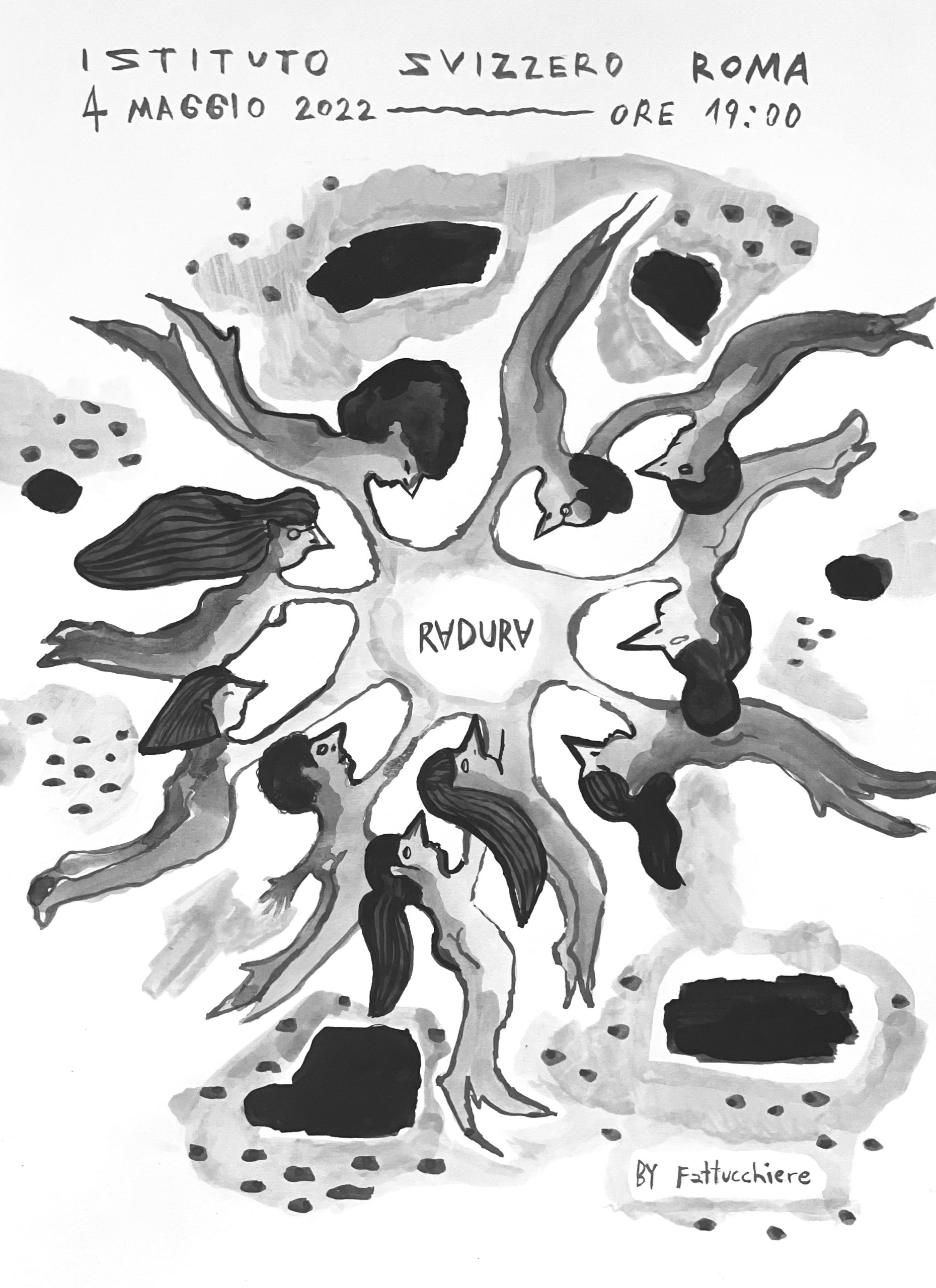 Rada Koželj chooses languages that require the mastery of one’s own individual sign (painting, singing, and writing), means that have been used as a sort of ‘divination tool’ that allows, through the unrepeatable individual experience, to verify one’s existence. She graduated in painting at the Brera Academy of Fine Arts in Milan (2013). During her internship year at Archive Books – a publishing house in Berlin – she developed Adamant, her novel and artist book. She lives and works between Lake Como and Milan.

VÍZ is the solo project of Réka Csiszér an Hungarian vocalist, musician, composer, and performer from Transylvania. As VÍZ, Csiszér presents a new project and her first solo album via BlauBlau Records. Veils consists of seven tracks. A piece of work for the earth and the ether. For existence and artificiality. For the inevitable dawn of decay. For forgiveness. For new beginnings. And for the cycle that never ends. Csiszér is a prominent and prolific artist active in numerous multidisciplinary projects and collaborations, and aims to create conceptual, audio-visual works steeped in science fiction and avant-garde experimentation. Her compositions blend elements of soundtrack, experimental music, avant-pop, kosmische, ambient, classical and radio art. For the IOIC (Institute of Incoherent Cinematography) Csiszér composes live scores for silent movies.

The ৺ ෴ ❃ ර ∇  ﹌﹌ collective was founded in October 2020 between Palermo, Naples, and Berlin as a space of militant and artistic practice. The intent is to explore the intersection between feminism and the Southern question, reworking traditional myths and historical narratives in order to create multi-temporal alliances with the present. The methodological approach of the group involves the use of dialogical form and self-formation as a practice of collective inquiry.

Fattucchiere is a project by Marta Margnetti and Giada Olivotto. Marta Margnetti is an artist focusing — through sculpture, installation, performance and drawing— on the creation of domestic geographies and imagined liminal places. She graduated at HEAD Geneva and HKB Bern and she has been awarded a number of prizes and scholarships, including Manor Prize (2020) and Kiefer Hablitzel Prize (2017). Giada Olivotto is an independent curator, her research oscillates between community phenomena and feminist collectives. Giada is co-director of the Sonnenstube off-space and co-founder of the project La Fornace (Milan) and the web-radio channel CANALE MILVA. She graduated from NABA Milan and she has been awarded recently the Swiss Art Awards (2021), an award that gave her the opportunity to establish an artist residency in Lugano named Souvenir Souvenir. Both inspired by the themes of magic realism and feminist practices, in Rome they work on the project Fattucchiere: through a collaboration with female* artists, they enact daily acts of resistance.