The evening will take place on the 18.12.2021 from H18:00 to H24:00 at Istituto Svizzero, Via Liguria 20, Rome. Free entrance.
Food and drinks can be purchased on-site.
Please register here to participate.

Each performance will last approximately 30 minutes with a 30-minute break in between.
Access will not be allowed once each performance has started.
For this occasion our current exhibition Do You Hear Us? will be open until midnight. 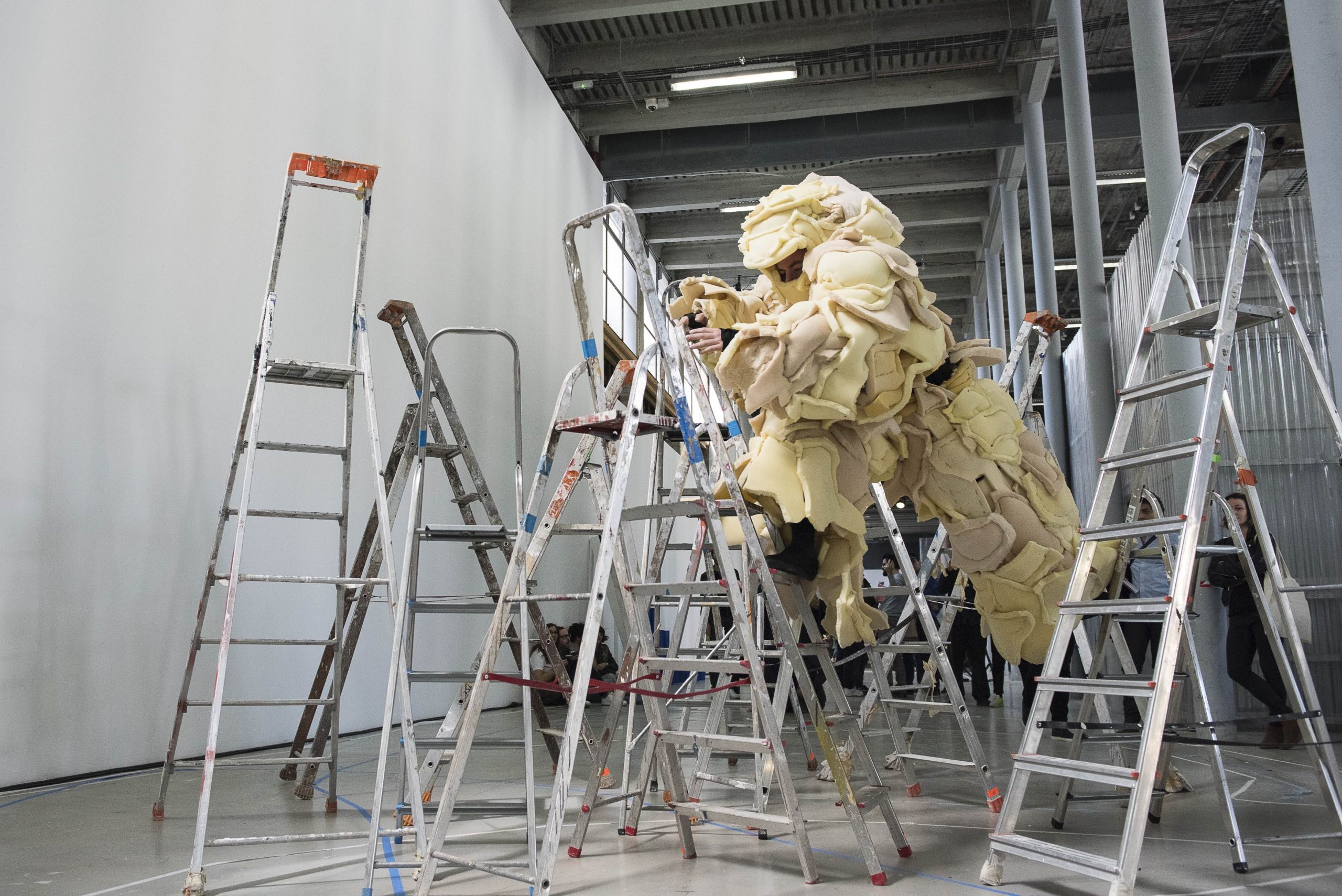 Annamaria Ajmone is a dancer and choreographer. At the center of her research there is the body as a moldable and changeable material capable of transforming spaces into places by creating parallelisms and temporal overlaps. She collaborates with several artists* such as Cristina Kristal Rizzo, Caned Icoda, Palm Wine, Bienoise, Francesco Cavaliere, Muta Imago, Sara Leghissa, Industria Indipendente, Felicity Mangan, Flora Yin Wong, Natalia Trejbalova. She has worked as a dancer with Alias Compagnie, Ariella Vidach, Daniele Ninarello, Santasangre, Mithkal Alzghair, Moritz Ostruschnjak. She won the Danza&Danza 2015 award as ‘best emerging contemporary performer’. She is one of the organizers of Nobody’s Indiscipline, a platform for the exchange of practices between artists and NONE, a gathering and party practice dedicated to performance. She is associate artist of Triennale Milano Teatro 2021-2024 (IT).

Nicole Bachmann is an artist based in London and Zurich. She works across video, text, sound and performance. She situates the body as a site of knowledge production used to explore alternative discourses within language and form. By using movement and voice, Bachmann intends on subverting languages power and political relations that she believes is attached to normative vocabulary, opening up spaces or gaps in which to “embody vocabulary” where new meaning can be created. In becoming other-too, Bachmann wants to question the structures of social norms through her own and others bodies and voices, providing a refreshing and relevant agency. Nocturnal Creatures, Whitechapel Gallery, London; Along A Long So Long, VITRINE, Basel; Sonic Matter, Festival for new music, Last Tango, Zurich; partly anchored, a mesh of seeds, Istituto Svizzero in Roma and Palermo; Tomorrow is an island, as inland, a sin land, ADM Gallery, Singapore, full stop slightly high, Vitrine Gallery, London (solo presentation); Fluid Bodies, E-Werk, Freiburg i. Br., Germany; on sight/site, posters in public space, Switzerland; Rub your shoulders with mine, Topic/espace picto, Geneva.

Tosh Basco was born in California and rose to prominence in the drag scene in San Francisco in the 2010’S. Well known for her movement-based performances under the name boychild, Basco’s photography and drawing accompany the performance practice. Viewed as a whole, all of Basco’s work attempts to enfold language, representation and becoming together in spaces where they are presumed to exist as discrete entities. She is co-founder of the collaborative entity Moved by the Motion with Wu Tsang and collaboration remains a vital aspect to her work. Basco’s work has been presented at the Venice Biennale; the Sydney Biennial, The Whitney Museum of American Art, New York; the Museum of Contemporary Art, Chicago; MOCA, Los Angeles; ICA London among other institutions.

Jacopo Belloni lives and works between Geneva and Rome. He graduated from the Academy of Fine Arts of Brera, Milan (2014), and from the University of Milan (2018). In 2021 he graduated from the Work.Master at HEAD, Geneva. His research addresses the narrative, imaginative and symbolic structures that human beings adopt relating to states of crisis and the unpredictability of the reality in which they live. Linking studies on popular culture, history of religion and anthropology, he reflects on the appearance of new forms of superstitions and beliefs in our contemporary world in relation to ancient mythologies and legends. He exhibited and has participated in residencies internationally. In 2021 he was sectioned for the second round of the Swiss Art Awards, Kiefer/Hablitzel Prize section during Art Basel and for the second round of Biennale College Arte, Venice Art Biennale. Since 2018 he is co-founder and co-curator of Terminalia, a transdisciplinary non-profit association with social and cultural purpose working in marginal and internal areas of central Italy.

Bunny Dakota (aka Martina Ruggeri) founds in 2005 with Erika Z. Galli Industria Indipendente, a performing and visual arts collective. During the years they cross different languages and practices: from the creation of performances to long lasting happenings, to installations and writings for theater, museums, independent and unconventional spaces. Each appearance of Industria Indipendente moulds a different dimension, activating and interweaving from time to time writing, work on body and voice, sound; the practice of tattooing and transmission of knowledge mixes with live music and dj-set, giving life to imaginary universes open and to be lived together. Regardless of the materials and practices they use, their works articulate some reflections: the relationship between human being and nature, the dimension of « unproductive » time, the construction of alternative and fictional worlds in which to generate communities and alliances, the continuous overturning and re-creation of individual and collective identities.