Performances in the garden

The performances will take place in the garden of Istituto Svizzero from H19:00 to 22:00.
Free entry, register here.

Is the garden a domesticated place or not entirely? It is guarded, protected by the walls, it is designed and managed by the gardener, supervised by the owner. Yet, there is something mysteriously uncontrollable, that crawls in its shadowy nooks, rustles in the thickets amidst the quietest night. Birds, insects and winds don’t care about the fences and private property policies, dwell there without asking permission, creating their baffling habitats or sojourns, ignorant of established order. So do ghosts. Expelled from their own lives, they are wandering in search of a restful corner and probably some ears that would listen to their secrets. The garden, which is often a refuge for melancholics and loiterers, attracts them promising a chance to meet tolerant companions. Let us welcome them and listen to their stories of afterlife.

The performances are curated by Lesia Kulchynska, currently a fellow at Max Planck Institute for Art History, Rome, as part of the programme #ScienceForUkraine Art History Fellowships of the Bibliotheca Hertziana in collaboration with Istituto Svizzero.

Dasha Chechushkova was born in Odessa, Ukraine. She graduated from the College of Arts named after Mitrofan Grekov in Odessa (2014-2018), entered the National Academy of Arts in Kiev, changed specialization from graphics to theory after one academic year (2018-2023).  At present she lives and works in her hometown, Odessa.

Olena Siyatovska
‘The dream is not like a dream’

Olena Siyatovska was born in the Czech Republic. She grew up in Dnipro, lives and works in Kiev. She studied at the National University of Oles Honchar (Ukraine) and University of Fine Arts in Poznan (Poland). Siyatovska focuses on social relations, human rights, and identity in the digital dimension. She works with new media, performance, video and installation. She received a scholarship from the Ministry of Culture of Poland “Gaude Polonia” in 2019 and has participated in exhibitions and residencies in Ukraine, Poland, Lithuania, and Germany. I am Michelle documentary film is the directing debut of Siyatovska, the project was supported by the Embassy of the Netherlands in 2020 and the British Council Ukraine in 2021.

Borys Kashapov
‘Only for men’

Borys Kashapov is a Kiev based artist, a graduate of the Rodchenko School of Photography and Multimedia. Kashapov was a member of the REP Group, the Penoplast dream-band, the Gay Carousel collective and initiator of many self-organizing projects and alter-institutional artistic practices. He works with video and performance. Through his works he explores power relations in art, and political aspects of the form.

Reliving is a mode of extreme memory, positive or negative, trauma or ecstasy. It is when the space between reality and memory becomes blurred, becomes close enough to touch and feel, to be real again. Not eerie like a déjà vu but loops embedded in our anachronistic senses. We can choose to dwell in reliving as if it were a parallel reality.

Garrett Nelson in their latest commissioned work around the artist Cathy Josefowitz picks up on a single work from her archive, a painted paper painter’s suit, and creates a sculptural and wearable continuation as a new series. They use these to relive, in a performative and painterly sense, the gestures of Cathy Josefowitz. They pay particular attention to the anachronism of gestures and the fundament of reliving as a bi-temporal or multi-temporal experience and what it means to re-perform without the desire or need for accuracy. They take and defend a position that to re-perform is a way to relive – where the insertion of life means chance, failure and ultimate forgiveness.

The performance is the fourth part of the project Garrett Nelson x Cathy Josefowitz, and is developed on the occasion of the exhibition Cathy Josefowitz. The Thinking Body on view at MACRO — Museum of Contemporary Art of Rome from 16.03.2022 to 19.06.2022 (a cooperation between Kunsthaus Langenthal, MACRO — Museum of Contemporary Art of Rome, Centre culturel suisse. Paris), produced in cooperation with l’Arsenic-Centre d’art scénique contemporain in Lausanne and La Becque, La Tour-de-Peilz. 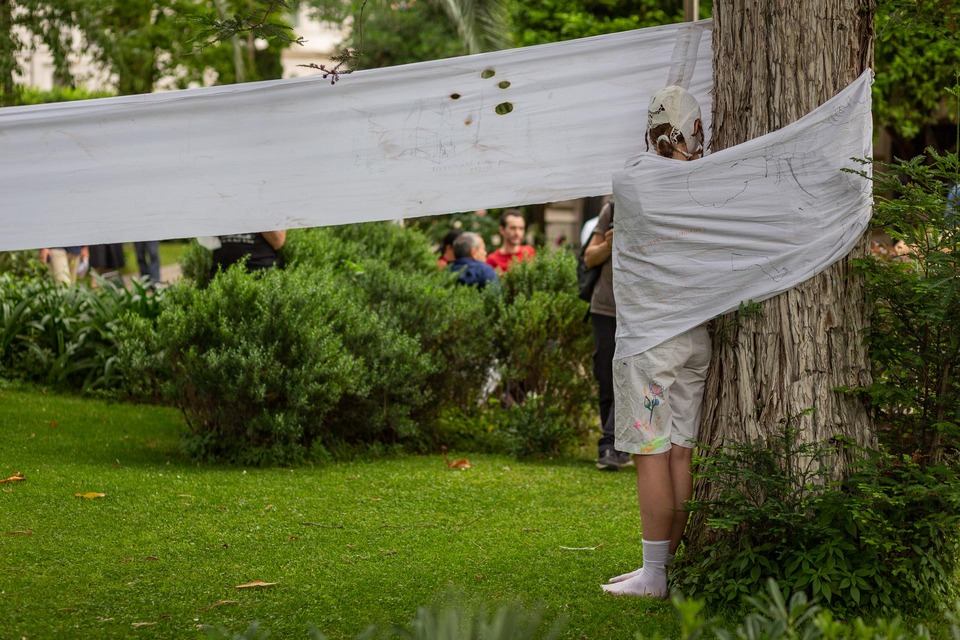