To coincide with Milano Art Week 2022, the Museo del Novecento presents ONE, a performance by Swiss artist and choreographer Marie-Caroline Hominal, one of the leading figures on the Swiss contemporary scene and winner of the 2019 Swiss Dance Awards as ‘Outstanding Female Dancer’.

The performance, structured in three ‘paintings’, questions the fall, the art market and authorship. Through a vocabulary of gestures and choreographic scores, Marie-Caroline Hominal evokes a surreal auction involving the audience, laying bare the commodification of performance and bodies. Commenting on the forms of cultural consumerism and neo-liberal economies in the art system, ONE publicly exposes the relationship and power relations established between the artist and those who present her work, in an amusing, captivating, subtly disenchanted self-portrait.

During the performance, the artist plays with the bitter and seductive objectification of the body, which characterises the contemporary world and is particularly explicit in the condition of the performer. Against a backdrop of cardboard boxes in which she stumbles, which she simultaneously incorporates and by which she is clumsily incorporated, Marie-Caroline Hominal shows the body as becoming-a-thing (quoting Mario Perniola), becoming a commodity to buy and sell, alternating the grotesque and bizarre with grace, fragility and fall, which are also metaphors for the artist’s career.
Dissolving her identity between passivity and desire, the choreographer soon becomes the image of a body that trains and disposes itself to be for the other, public, market, curator, interpreting with forms that look to the imagery of burlesque the not innocent relationship between those who occupy the stage and those who watch it.
The entrance of a batter reifies and exasperates the condition. The Museum becomes the theatre of the auction in which seven choreographic sequences from the choreographer’s repertoire are put up for sale. Participants can buy them in the usual way, raising the price each time until they obtain Hominal’s gesture in their personal collection.

ONE is part of a tradition of works by choreographers and artists who reflect on the value of performance and ephemeral art in the art market (La Ribot, Ismael Ivo, Orlan). It does so with a delicate and almost hallucinatory game of provocation, with an ethereal seduction, where we look at embarrassment, at that dazzling shyness and impenetrable exposure of being a body on stage.

Also, on the 24th of May 2022, Istituto Svizzero will show the performance Eurêka c’est presque le titre by Marie-Caroline Hominal, as part of the House of Switzerland project at the Casa degli Artisti in Milan. 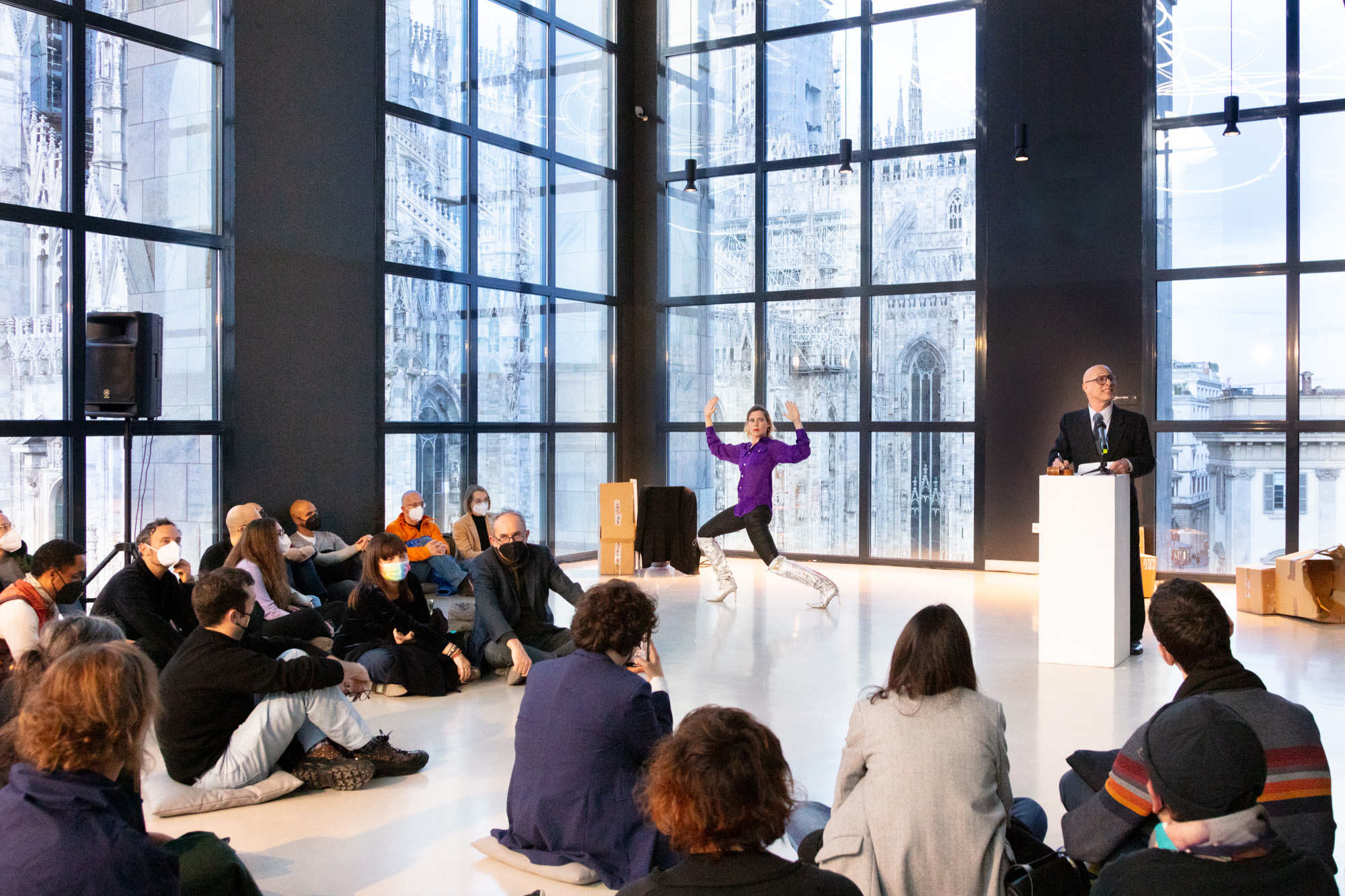 Marie-Caroline Hominal (lives and works in Geneva): visual artist, choreographer, performer, she is among the reference figures of the Swiss contemporary scene. She was awarded in 2019 as ‘Outstanding Female Dancer’ at the Swiss Dance Awards/Federal Office of Culture. Her artistic practice includes text, drawing, dance, video, sculpture and radio. She trained at the ZHdK – TanzAkademie in Zurich and the Rambert School of Ballet and Contemporary Dance in London, joining the National Youth Dance Company. He has worked with choreographers of international importance such as Gisèle Vienne, Gilles Jobin, La Ribot and Marco Berrettini. Her personal research began in 2002 when she dedicated herself to new media and video and installation formats, and then moved towards choreography in 2008 with the solo Fly Girl. Her performances have been presented in theaters, museums, unconventional places. She is currently developing her new work, Hominal/Hominal, a collaboration with visual artist David Hominal, scheduled to debut in March 2023. The artist associated with the Teatro Sociale in Bellinzona and at the Swiss Cultural Center’s ‘accompanying program’ in Paris.